Short term staff mobility and short term pupil mobility The teacher and pupil mobility meetings in in Split, 24th to 30th of Januray 2016. . All groups arrived on Sunday 24th and left on 30th. 20 students from Italy, Spain, Latvia, Poland and Croatia were hosted by Croatian pupils and their families. 16 teachers found accomodation in a nice centrally located hotel Marul. The hosts met teachers in the lobby of the hotel on Sunday to discuss project activities.

On the first day, at 8:30, all participants met in classroom 1 of Pitagora for introductory session. Croatian pupils prepared a short video about a typical day in school as a part of their CLIL activities. Project coordinator Dragan Supe introduced all activities with help from his fellow teachers.

Guests were also shown a video about Split. From that point on two goups (teachers and pupils) were dived into their own activities. Ice breaking activity for teachers was the presentation of evaluation of lesson plans creatged in the project. Pupils were taken to ICT lab where Pitagora's ICT teacher presented the pupil activity for the week- setting up a google drive project folder.

After school, pupils and teachers had a joint lunch to start off the week and afterwardsthey went to the center of Split for a tour of the historical center of Split.

Teachers started the day with activity „CLIL Modelling a lesson“ where they discussed their experience with the lessons in their own respective countries. In the mean timepupils were split into two groups, first one had a CLIL History lesson about Diocletian's palace and the other group had CLIL Maths lesson „Verbal Maths“ along with a mock SAT Maths exam. The results showed that pupils from scientifically oriented secondary school from Alzano had bit higher level of ability in Maths than other schools. Two groups switched after the break. Teacher went with the project coordinator to observe the second group and CLIL History in-situ lesson.

Afternoon was reserved for sport activities and the host choose bowling- as it is a nice indoor activity all pupils and teachers could participate in regardless of their current level of fitness.

All participants agree that Wednesday was the most interesting day of the week. A very interesting CLIL activity for pupils was organized in the Nature Park Marjan connected to the ICT activity set up on Monday. Pupils were split intop groups that had a task to photo vegetation of Marjan and organize the photos on the drive. But first, at 8:30, pupils went to Museum of natural History in Split to see the exhibition called- „Lessepsian migration“ and various other exhibitions held there. Teachers had a brief presentation in school about Bloom's taxonomy and application to CLIL by Ana Majic, Pitagora's Psychology teacher. At 10:30 they also went to the Museum and later joined the pupils' class on Marjan. At noon, all groups converged in the center of the Nature Park and a biologist held a lesson about vegetation of Marjan hill and history of the Nature park. The sunny weather helped all participants to learn in a really pleasent environment. The activity was led by Visko Sviličić, Geograhy and Geology teacher and two biology teachers from Pitagora. In the afternoon both pupils and teacher had a lunch in a restaurant. As all participants were exhausted there couldn't have been a better idea.

Thursday was the busiest day of the week- pupils had their Cambridge language tests (choice from B1 to C1), and teacher listened to two lectures: the first about CEFR SCALE from guest lecturer Mr Ante Demo, a senior Speaking Examiner of Cambridge English exams, and another lecture by Ms Tina Alujević, a representative of Uniworld, an organization that helps pupils study abroad in English speaking countries.

After the break at 11, teachers took their exams, from B2 to C2. Pupils had a CLIL history lesson about the Roman weaponry with a special surprise- guest from the NGO Diocletian's legion- who brought replicas of Roman weapons to class. Even Diocletian himself appeared before them.

Last day of activities pupils and teacher spent in Trogir and Salona. CLIL Art history lesson about the historical center of Salona was prepared by L.Rismondo and teachers and pupils were shown all major works of Art in the nenter of Trogir. At noon the bus took pupils and teachers to Salona, once the capital of Roman Dalmatia, now in ruins. Teacher Majić hel a lesson there for pupils about the Roman history of Salona while the teachers observed the lesson. It wrapped up the week of Roman history as major part of our CLIL activities.

Later in the day teachers met for the farewell dinner and pupils had their own faerewell party in a local club.


On Saturday morning the hosts met all groups in the morning in the hotel and wished them goodbye. Until Warsaw! 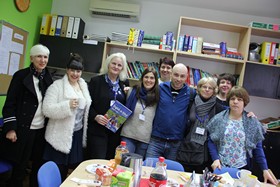 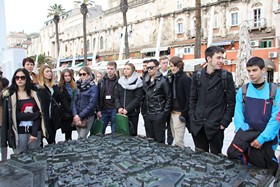 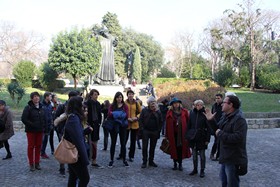 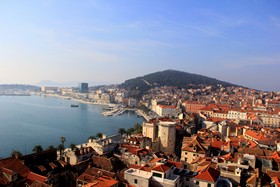 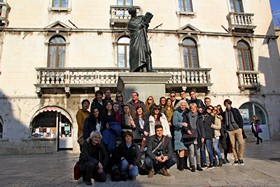 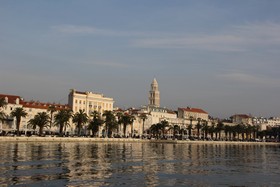 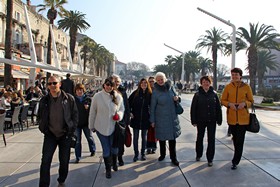 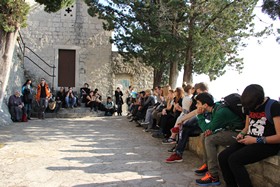 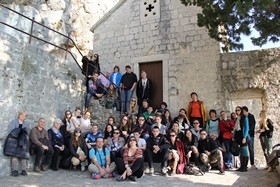 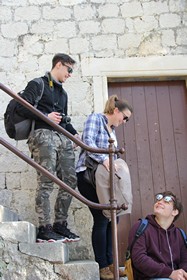 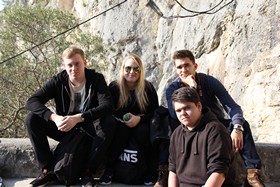 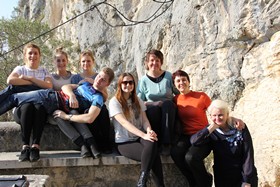 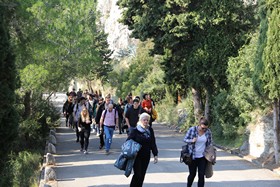 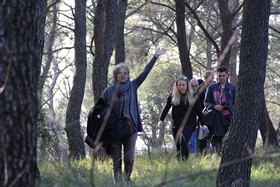 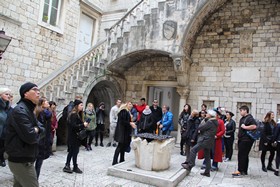 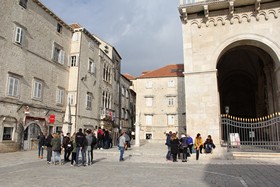 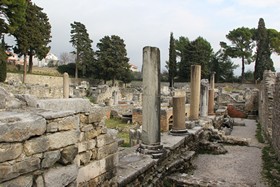 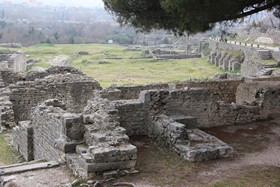 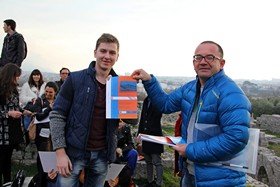 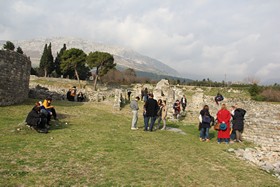